Dashboard for the first 8 months of a child’s life 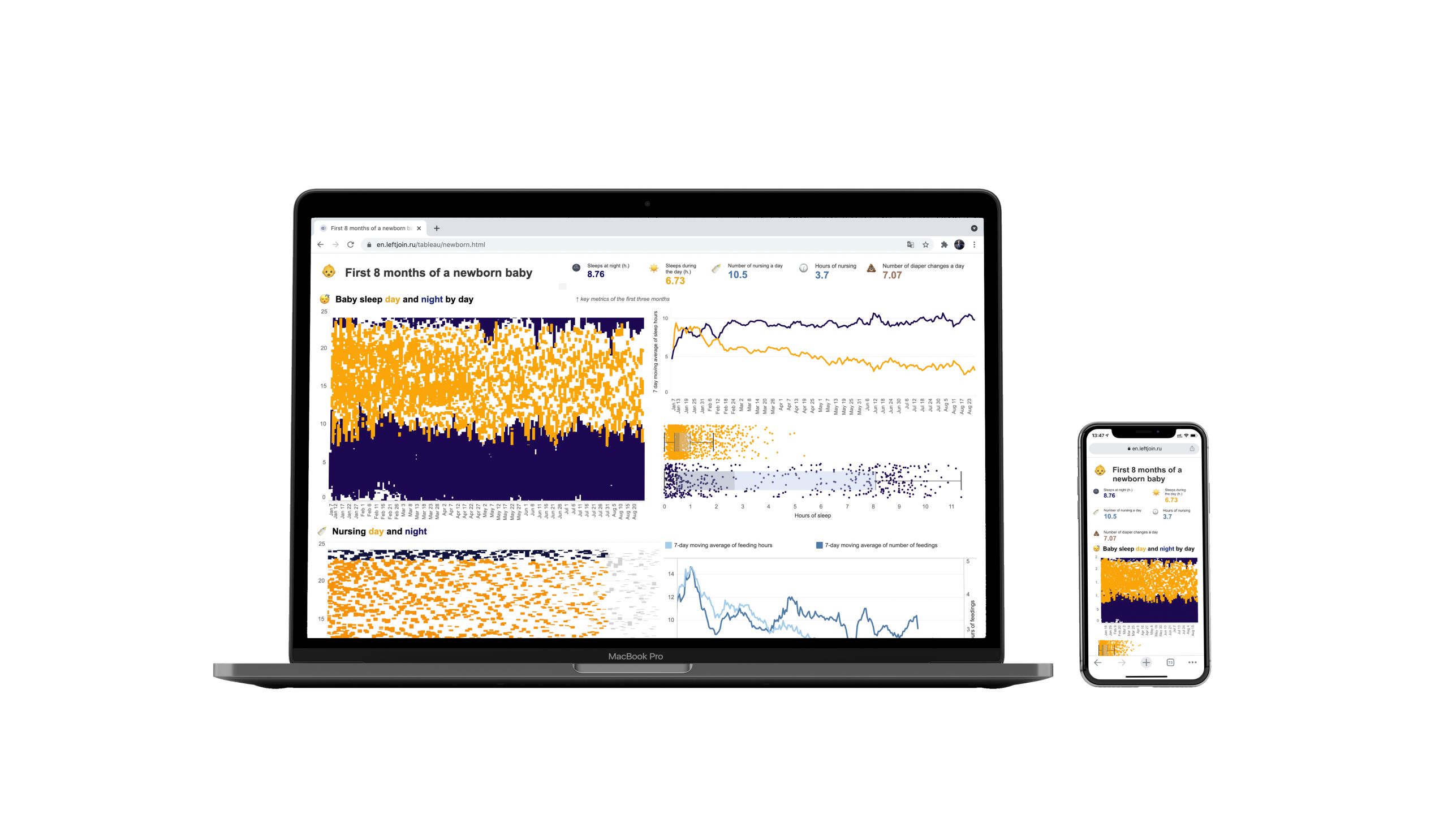 In December 2020, I became a dad, which means that our family life with my wife has changed drastically. Of course, I am sharing this news with you for a reason, but in the context of the data that we will study and research today. They are very personal for me, and therefore have some special magic and value. Today I want to show how dramatically the life of a family is changing by the example of my own analysis of the life data of the first 8 months of a baby.

Initial data: tracking the main elements of caring for a baby in the first 8 months: sleep, nursing, changing a diaper. The data was collected using BabyTracker app.
My wife is a great fellow, because during the first 7 months she carefully and regularly monitored all the important points. She forgot to turn off the timer for nursing the baby at night only a couple of times, but I quickly saw noticeable outliers in the data, and the dataset was cleared of them.
Initially, I had several data visualization ideas in my head, and I tried to immediately implement them into the projected dashboard. I wanted to show the baby’s sleep intervals in the form of a vertical Gantt chart, but the night’s sleep went through the midnight (0:00), and it was completely incomprehensible how this could be corrected in Tableau. After a number of unsuccessful independent attempts to find a solution to this problem, I decided to consult with Roman Bunin. Unfortunately, we came to the conclusion together that there is no way to solve this. Then I had to write a little Python code that splits such time intervals and adds new lines to the dataset.
However, while we were texting, Roma sent an example identical to my idea! This example claims that a woman collected data on her child’s sleep and wakefulness in the first year of child’s life, and then wrote the code with which it turned out to be embroidered towel with pattern datavis baby sleep. For me, this was surprising, since it turned out that this way of visualization is the main method that allows you to show how difficult life and sleep of parents is in the first months of the birth of a child.
In my dashboard on Tableau Public I got three semantic blocks and several “KPIs” about which I would like to tell you in detail and share the basic everyday wisdom. At the top of the dashboard, you can see the key averages of the daytime and nighttime sleep hours, nursing hours, frequency of nursing, and the number of diaper changes in the first three months. I have allocated exactly three months, because I think this is the most difficult period, because significant changes that require serious adaptation are taking place in your life .

The left diagram – called “Towel” – illustrates the baby’s sleeping periods. In this diagram, it is important to pay attention to white gaps, especially at night. These are the hours when the baby is awake, which means that the parents are also awake. Look at how the chart changes, especially in the early months, when we gave up the habit of going to bed at 1 or 2 in the morning and fell asleep earlier. Roughly speaking, in the first three months (until March 2021), the child could fall asleep at 2 or 3 in the morning, but we were lucky that our child’s night sleep was quite long.
The right graph clearly illustrates how the baby’s day and night sleep length changes over time, and the boxplots show the distribution of the hours of daytime and nighttime sleep. The graph confirms the conclusion: “This is temporary and will definitely get better soon!”

The left graph is the highlight of this dashboard. As you can imagine, this is a map of the most fun moments – changing a diaper. The stars represent the moments of the day when you need to change the diaper, and the light gray color below shows the number of changes per day. The graph on the right shows diaper changes counted by part of the day. In general, the diagram does not show any interesting dependencies, however, it prepares you for the fact that this process is frequent, regular and happens at any time of the day.

It seems to me that the use of real personal data and such visualization is sometimes much more revealing than a lot of videos or books about what this period will be like. That is why I decided to share my findings and observations with you here. The main conclusion that I wanted you to draw from the dataviz: children are great! ❤️

Tweet
Share
Share
Send
43   2 mon   data analytics   python
Python and lyrics of Zemfira’s new album: capturing the spirit of her songs
← Ctrl →
How and why should you export reports from Jupyter Notebook to PDF
Popular

How to calculate Retention?

Working with Materialized Views in Clickhouse