Just recently I have completed a Clickhouse Training by Altinity (101 Series Training). For those who are just getting to know Clickhouse, Altinity offers free basic training: Data Warehouse Basics. I recommend starting with it if you are planning to dive into learning.

I would like to share my experience on the training as well as the training notes.
The training costs $500 and lasts 4 days for 2 hours. It is carried out in the evenings Moscow time (starting from 19:00 GMT +3).

The first day mostly revises everything covered in Data Warehouse Basics, but it has several new ideas on how to get useful information on queries from system tables.

For example, this query will show which commands are running and their status.

Besides, for me it was useful to learn about column compression with the use of codecs:

For those who are just starting with Clickhouse, the first day will be super useful as it will help in understanding table engines and syntax for their creation, partitions, inserting data (for example directly from S3).

I found the second day the most intense and useful as within this session Robert from Altinity talks about aggregate functions and materialized views ( detailed scheme for the creation of materialized views ) in Clickhouse in more detail.

It was super useful for me to learn about index types in Clickhouse.

During the third day, colleagues share their knowledge on how to work with Kafka and JSON objects stored in the tables.
It was interesting to find out that working with arrays in Clickhouse is very similar to arrays in Python:

When working with arrays, there is a great feature called ARRAY JOIN which “unrolls” arrays to rows.

Clickhouse allows you to efficiently interact with JSON objects stored in a table:

This piece of code is an example of how to extract the elements of the JSON array “request” and “status” separately.

The most difficult topic from my point of view was saved for the last day – building sharding and replication patterns and building queries on distributed Clickhouse servers.

Special respect to Altinity for an excellent collection of labs during the training.

According to GIGO (garbage in, garbage out) principle, errors in input data lead to erroneous analysis results. The results of our work directly depend on the quality of data preparation.

For instance, when we need to prepare data to use in ML algorithms (like k-NN, k-means, logistic regression, etc.), features in the original dataset may vary in scale like the age and height of a person. This may lead to the incorrect performance of the algorithm. Thus, such data needs to be rescaled first.

We will work with the simple table students that contains the data on the height of the students:

Min-max scaling approach scales the data using the fixed range from 0 to 1. In this case, all the data is on the same scale which will exclude the impact of outliers on the conclusions.

The formula for the min-max scaling is given as:

We multiply the numerator by 1.0 in order to get a floating point number at the end.

SQL-query with a subquery:

Rescaling within a given range

This is an option of min-max normalization between an arbitrary set of values. When it comes to data scaling, the values do not always need to be in the range between 0 and 1. In these cases, the following formula is applied.

We receive similar results as before, but with data spread between 10 and 20.

Using Z-score normalization, the data will be scaled so that it has the properties of a standard normal distribution where the mean (μ) is equal to 0 and the standard deviation (σ) to 1.

Z-score is calculated using the formula:

SQL-query with a subquery:

As a result, we can easily notice the outliers that exceed the standard deviation.

Window functions are calculation functions that can increase the efficiency and reduce the complexity of SQL queries, making things much easier:
View as  PDF 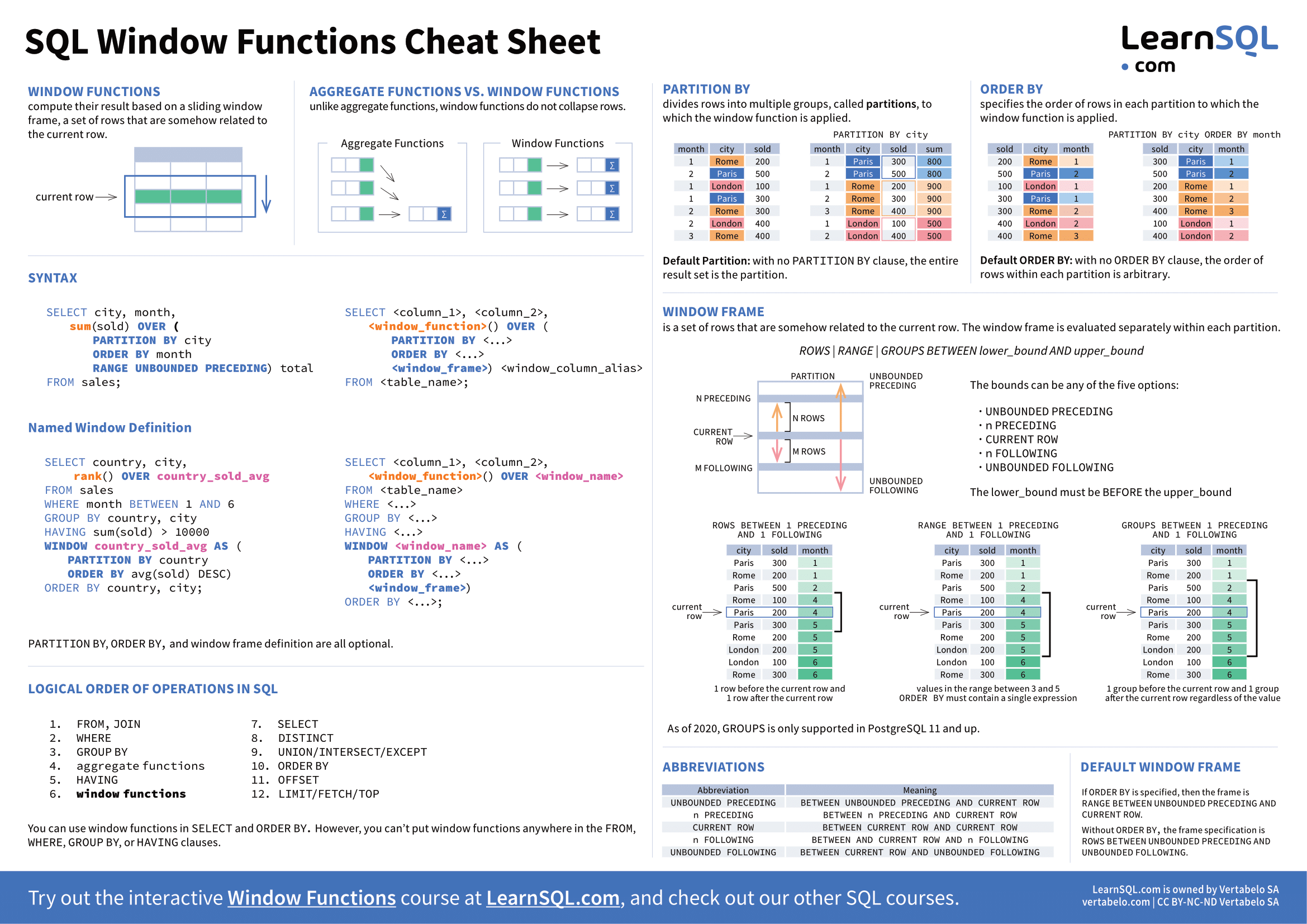 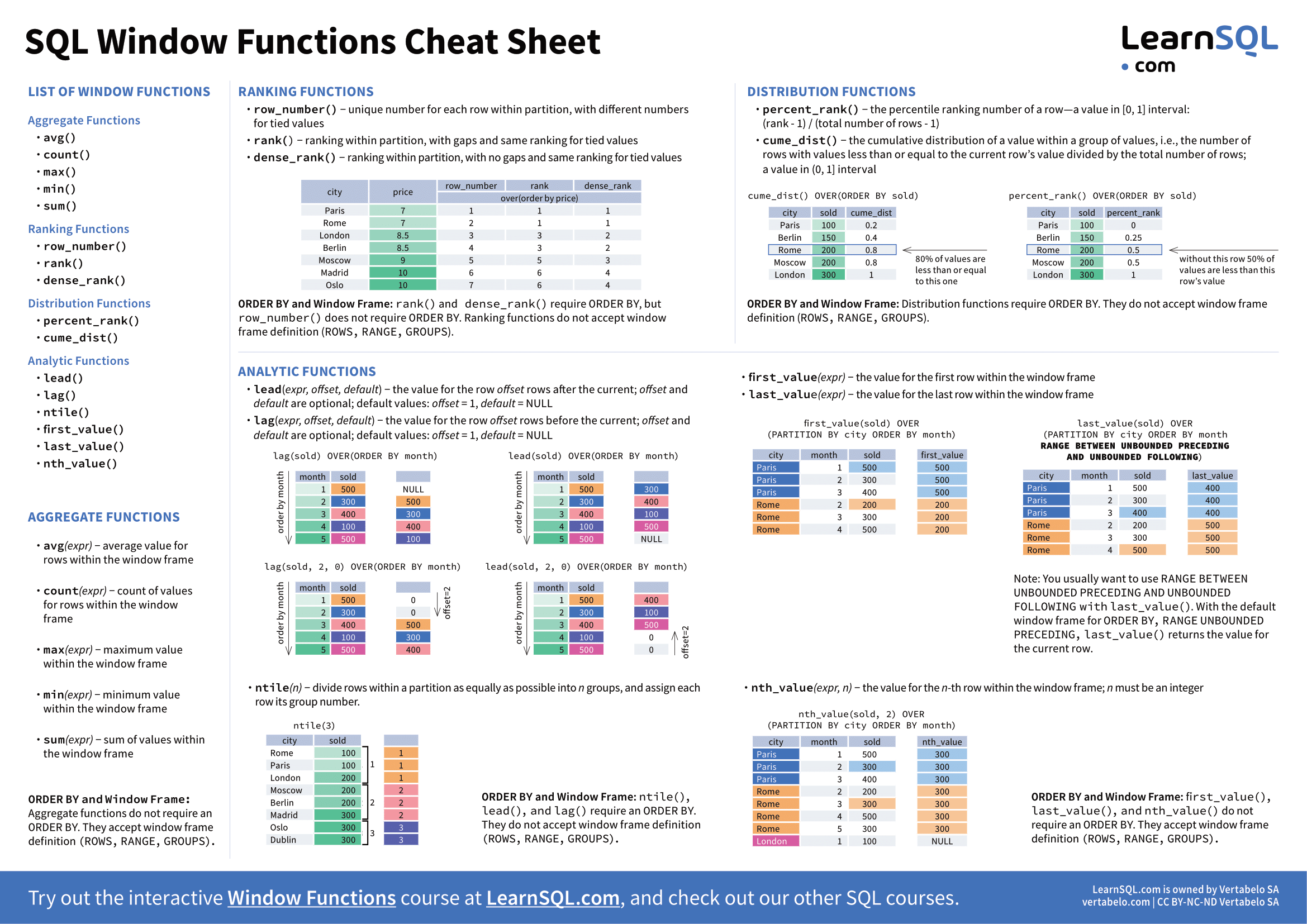 Special Thanks to LearnSQL, best place to master your SQL skills !

In one of the previous articles we have reviewed building of Retention-report and have partially addressed the concept of cohorts therein.
Cohort usually implies group of users of a product or a company. Most often, groups are allocated on the basis of time of app installation / appearance of a user in a system.
It turns out, that, using cohort analysis, one can track down how the changes in a product affected the behaviour of users (for example, of old and new users).

Along with that, cohorts can be defined also proceeding from other parameters: geography of a user, traffic source, device platform and other important parameters of your product.

We will figure out, how to compare Retention of users of weekly cohorts in Redash, since Redash has special type of visualization for building such type of report.
Firstly, let’s sort out SQL-query. We still have two tables – user (id of a user and time of app installation) and client_session – timestamps (created_at) of activity of each user (user_id). Let’s consider the Retention of the first seven days for last 60 days.
The query is written in Cloudera Impala, let’s review it.

For starters, let’s build the total size of cohorts:

The second part of the query can calculate the quantity of active users for every day during the first thirty days:

Bottom line, all the query entirely:

Great, now correctly calculated data is available to us. 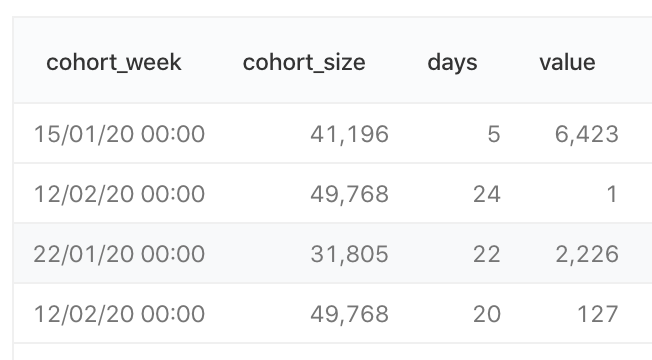 Data of cohorts in tabular form 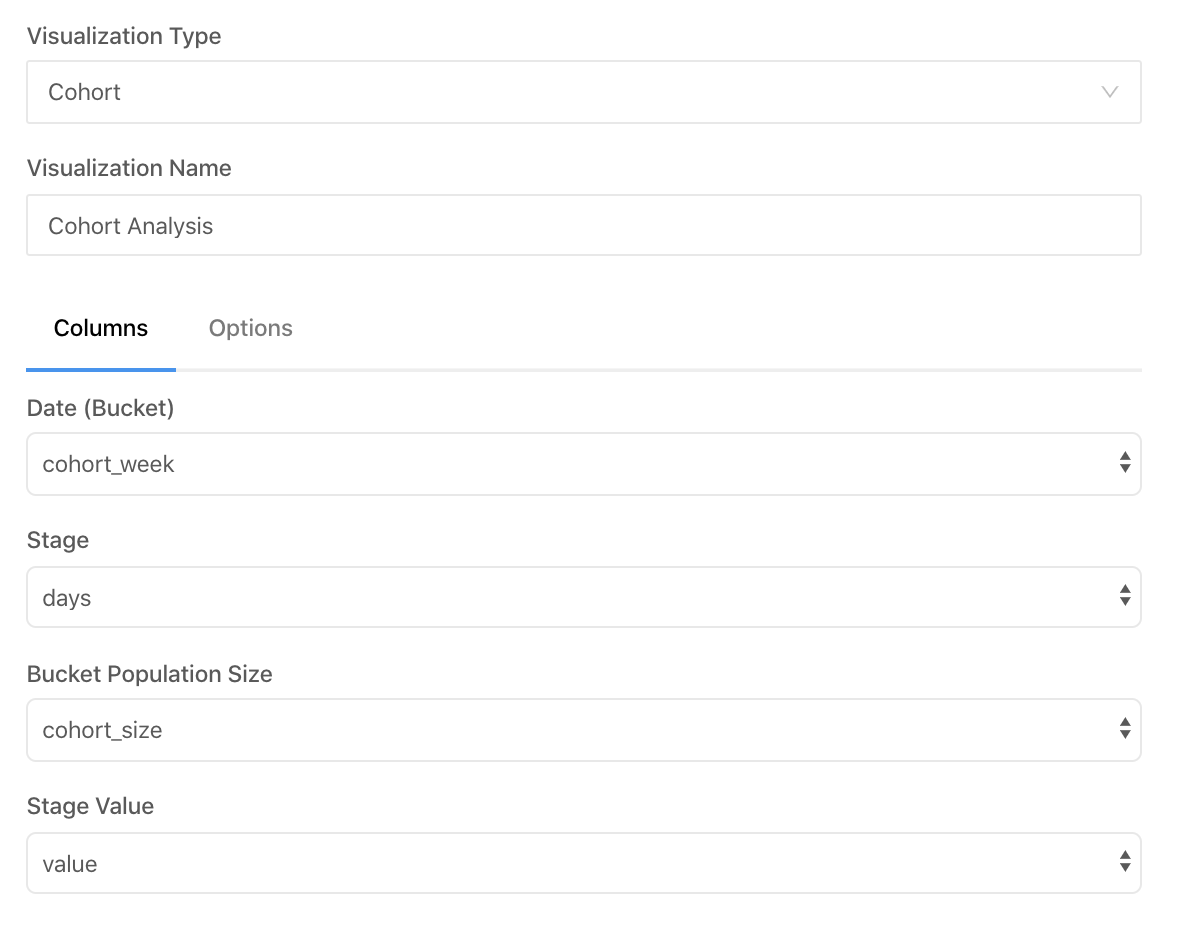 It’s important to indicate the parameters correctly – the columns of the resulting query are compliant therewith.

Let’s make sure to indicate that we have weekly cohorts:

Voila, our visualization of cohorts is ready:

Materials on the topic

Today we are going to talk about BI-platform Looker, on which I managed to work in 2019.

Here is the short content of the article for convenient and fast navigation:

Creators of Looker position it as a software of business intelligence class and big data analytics platform, that helps to research, analyze and share business analytics in real time mode.
Looker — is a really convenient tool and one of a few BI products, that allows to work with pre-set data cubes in a real-time mode (actually, relational tables that are described in Look ML-model).
An engineer, working with Looker, needs to describe a data model on Look ML language (it’s something between CSS and SQL), publish this data model and then set reporting and dashboards.
Look ML itself is pretty simple, the nexus between the data objects are set by a data-engineer, which consequently allows to use the data without knowledge of SQL language (to be precise: Looker engine generates the code in SQL language itself on user’s behalf).

Which DBMS you can connect to via Looker and how?

The selection of DBMS that Looker is working with is pretty wide. You can see the various connections on the screen shot below as of October, 2019:

You can easily set a connection to the database via web-interface: 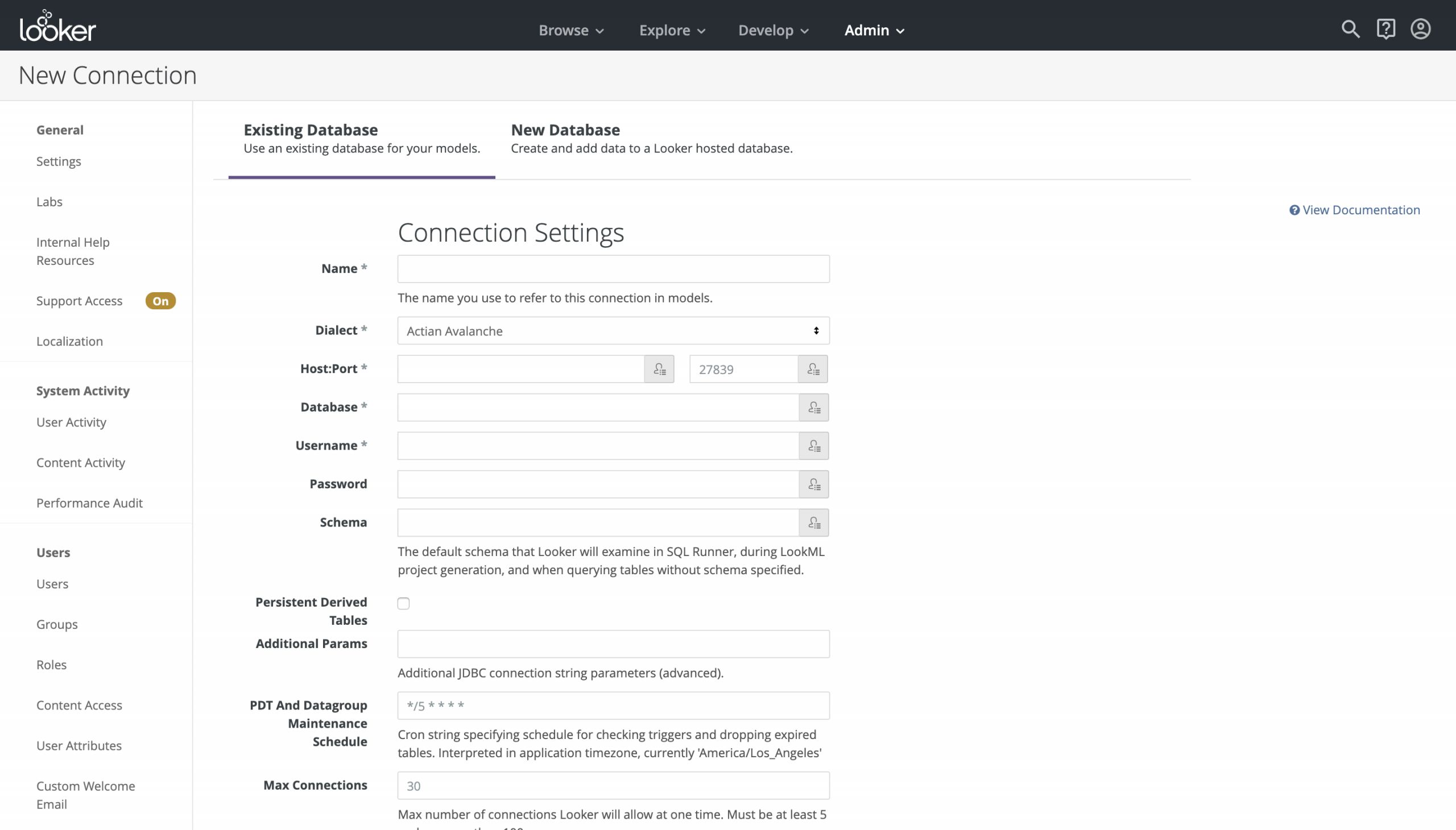 Web-interface of connection to DBMS

With regard to connections to databases, I’d like to highlight the following two facts: first of all, unfortunately, Clickhouse support from Yandex is currently missing (as well as in the foreseeable future). Most likely, the support won’t appear, considering the fact that Looker was acquired by a competitor, Google.
updated: Actually, Looker supports Clickhouse from the December 2019
The second nuisance is that you can’t build one data model, that would apply to different DBMS. There is no inbuilt storage in Looker, that could combine the results of query (unlike the same Redash).
It means, that analytical architecture should be built within one DBMS (preferably with high action speed or on aggregated data).

In order to build a report or a dashboard in Looker, you need to provisionally set a data model. Syntax of Look ML language is quite thoroughly described in the documentation. Personally, I can just add that model description doesn’t require long-time immersion for a specialist with SQL knowledge. Rather, one needs to rearrange the approach to data model preparation. Look ML language is very much alike CSS:

In the data model the following is set up: links with tables, keys, granularity, information of some fields being facts, and other – measurements. For facts, the aggregation is written. Obviously, at model creation one can use various IF / CASE expressions.

Probably, it’s the main killer-feature of Looker, since it allows any business departments to get data without attraction of analysts / data engineers. And, guess that’s why use of accounts with Explore mode is billed separately.

In fact, Explore mode is an interface, that allows to use the set up Look ML data model, select the required metrics and measurements and build customized report / visualization.
For example, we want to understand how many actions of any kind were performed in Looker’s interface last week. In order to do it, using Explore mode, we select Date field and apply a filter to it: last week (in this sense, Looker is quite smart and it and it will be enough writing ‘Last week’ in the filter), thereafter we choose “Category” from the measurements, and Quantity as a metric. After pressing the button Run the ready report will be generated.

Then, using the data received in the table form, you can set up the visualization of any type.
For example, Pie chart: 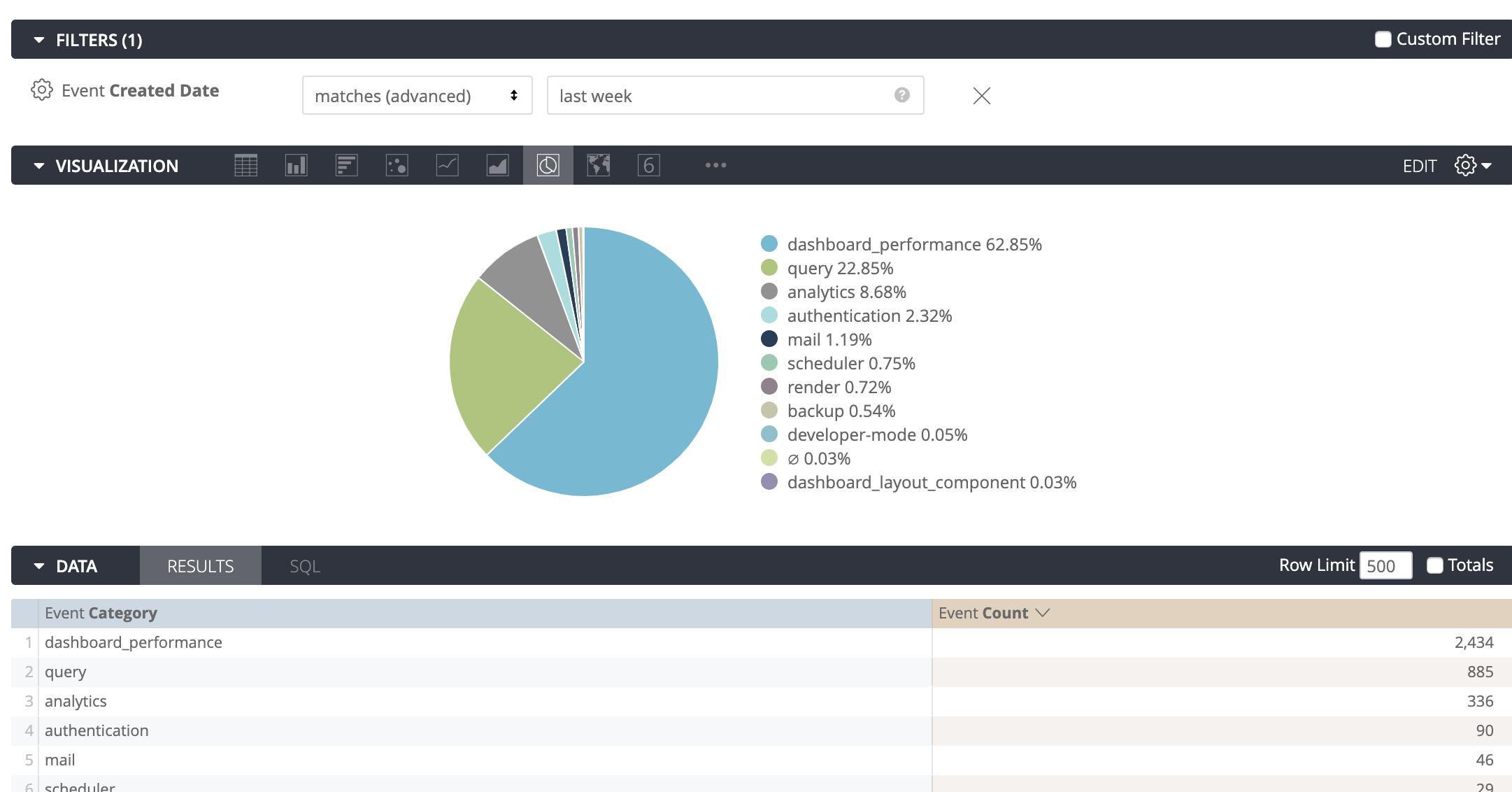 Building of reports and their saving in Look

Sometimes you can have a desire to save the set of data / visualization received in Explore and share it with colleagues, for this purpose Looker has a separate essense – Look. That is ready constructed report with selected filters / measurements / facts. 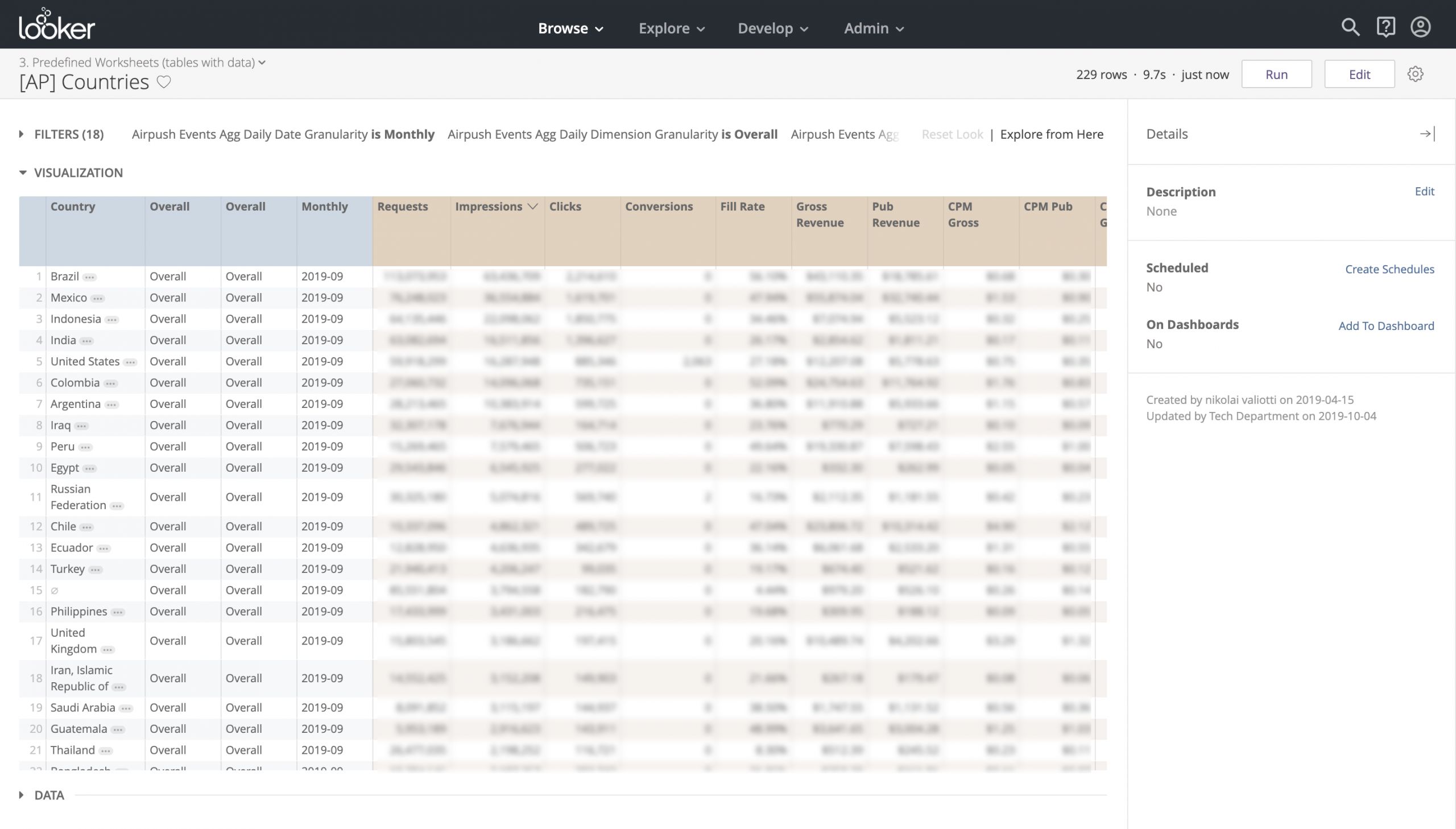 Example of the saved Look

Examples of dashboards in Looker

Systemizing the warehouse of Look created, oftentimes you want to receive a ready composition / overview of key metrics, that could be displayed on one list.
For these purposes dashboard creation fits perfectly. Dashboard is created either on the wing, or using previously created Look. One of the dashboard’s “tricks” is configuration of parameters, that are changed on all the dashboard and can be applied to all the Look at the same time. 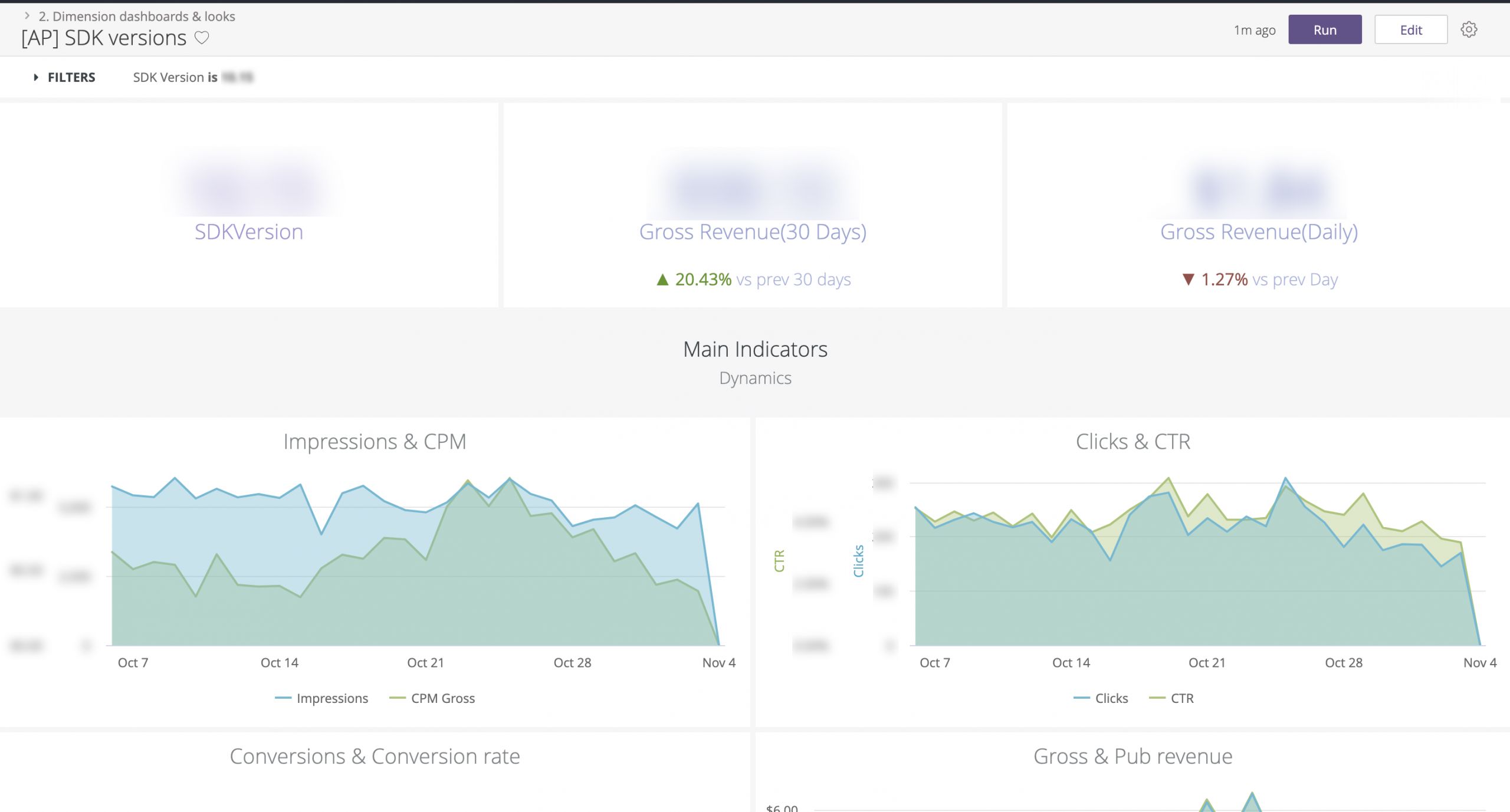 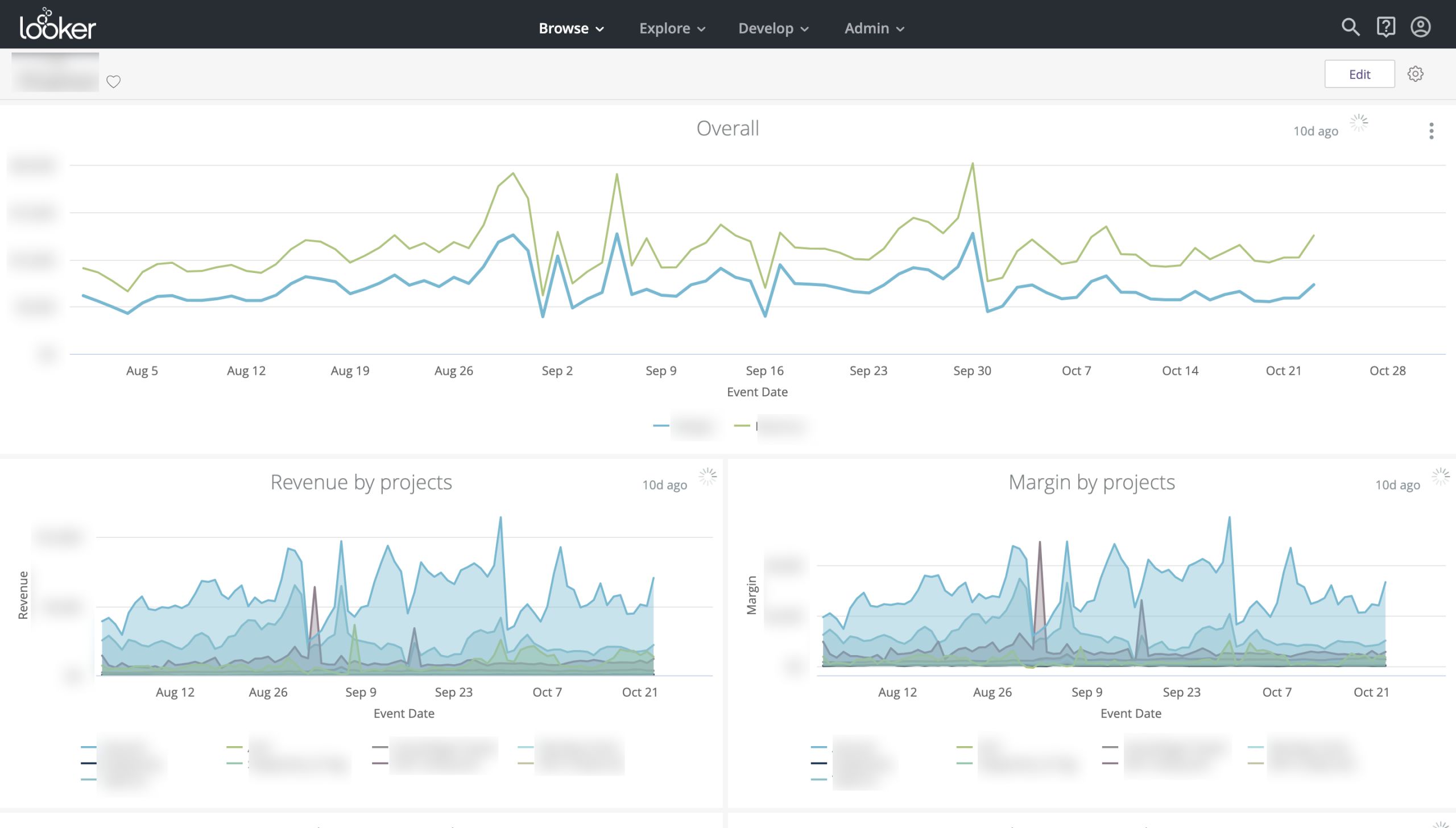 Interesting features in one line